A woman stands at a memorial for victims from the Sandy Hook shooting in Newtown, Connecticut. Photo: Justin Lane via NBC News

It’s been almost six years since a gunman opened fire at Sandy Hook Elementary in Newtown, Connecticut, killing 20 young children, six educators, his mother and himself on December 14, 2012.

The devastation was unimaginable. Flanked by mothers and fathers who lost their children, Governor Dan Malloy signed into law sweeping gun regulation just four months after the Newtown tragedy.

Connecticut has since been commended on a national level as a leader in gun control. In 2016, the chief medical examiner’s office reported the total number of gun deaths dropped 37% since 2012.[footnote]Foderaro, Lisa W., and Kristin Hussey. “In Wake of Florida Massacre, Gun Control Advocates Look to Connecticut.” The New York Times, The New York Times, 17 Feb. 2018, www.nytimes.com/2018/02/17/nyregion/florida-shooting-parkland-gun-control-connecticut.html.[/footnote]

Are tighter gun laws influencing these numbers? A closer look at the history of gun legislation in Connecticut reveals interesting data about its association with fewer gun homicides.

It may surprise some to know that Connecticut’s gun policy was already among the most restrictive in the nation at the time of the Sandy Hook Elementary School shooting. This was due largely in part to a slew of bills passed during the 1990s. Pivotal ones included:

Under these regulations, the Sandy Hook shooter should not have been able to acquire his guns. However, because the guns didn’t belong to him, none of these restrictions would have applied. He stole a Bushmaster XM-15 rifle and .22 caliber Savage Mark II rifle from his mother, who lawfully purchased and registered a large collection of firearms.[footnote]Buchanan, Larry, et al. “How They Got Their Guns.” The New York Times, The New York Times, 3 Oct. 2015, www.nytimes.com/interactive/2015/10/03/us/how-mass-shooters-got-their-guns.html[/footnote]Unfortunately, the laws didn’t prevent him from committing his crimes.
While it would appear that restrictions have little bearing on killers like the Sandy Hook shooter, Connecticut has set out to make it as difficult as possible for others like him to succeed in their mission.

With firm gun measures already in place, the gun control debate zeroed in on the issues of gun accessibility for the mentally impaired and the kinds of firearms used by mass gunmen, specifically those deemed most deadly.

Gun safety activists, including mothers of the victims at Sandy Hook, argue that the gunman would not have been able to take as many lives were he using a different gun than the Bushmaster XM-15 rifle. The rifle, which can fire at least 45 rounds per minute, projects rounds at 3,260 feet per second. These rounds can travel faster than handguns and may inflict more damage.

How many rounds the rifle fires and how quickly it can do so depends on several variables, including the shooter’s experience with handling such firearms. The Sandy Hook shooter was no stranger to guns. His mother, Nancy, regularly took him to the shooting range as a bonding experience to teach him how to “respect guns,” friends said.[footnote]Dimond, Diane. “Did Nancy Lanza Handle Her Guns Responsibly? ‘You’ll Be Surprised,’ Police Spokesman Says.” The Daily Beast, The Daily Beast Company, 7 Jan. 2013, www.thedailybeast.com/did-nancy-lanza-handle-her-guns-responsibly-youll-be-surprised-police-spokesman-says[/footnote]As his first victim on that fateful day before driving to Sandy Hook Elementary, the shooter’s mother may have unwittingly prepared her son to carry out one of the deadliest school shootings in American history.

The XM-15 rifle can also hold large magazines of bullets, enabling the shooter to fire several rounds in a shorter amount of time without needing to reload. A shooter may reload magazines in less than a second, depending on his or her skill level. This pause, it is speculated, might have allowed precious windows of time for victims to flee, thus sparing more lives. Shooters might also be subdued when they are reloading ammo, as was the case with Jared Lee Loughner in the shooting of congresswoman Gabrielle Giffords.

Another point in question was the Sandy Hook gunman’s mental health. Few commentaries can agree entirely, but he allegedly had up to ten psychological disorders.[footnote]“AbleChild.org.” AbleChild.org – Parents for Label & Drug Free Education, ablechild.org/2014/11/26/office-of-child-advocate-oca-breakdown/[/footnote]Among them, a condition that health experts wrestle to substantiate known as Sensory Processing Disorder (SPD). SPD can make everyday sensory stimuli such as t-shirt tags, the “Happy Birthday” song, or crowded sights unbearable. He was also believed to have a physical pain insensitivity from a rare disorder known as Congenital Insensitivity to Pain with Anhidrosis (CIPA). His school technology club advisor said in an interview, “If that boy would’ve burned himself, he would not have known it or felt it physically.”

Survivors’ families and advocates on all sides have demanded answers, yet several glaring details regarding the shooter’s psychological well-being remain a mystery. For example, his medical records for the last five years leading up to the shooting were prematurely destroyed by his former psychiatrist, Paul Fox, two years earlier than is mandated by law. Fox fueled controversies when he fled the country after the shooting, lied to authorities concerning the whereabouts of the gunman’s medical records and was later arrested on 3 counts of sexual assault of a 19-year-old patient.[footnote]“Sandy Hook Shooter’s Psychiatrist Arrested – Citizens Commission on Human Rights, CCHR.” Citizens Commission on Human Rights, CCHR, 15 June 2016, www.cchrflorida.org/sandy-hook-shooters-psychiatrist-arrested/[/footnote]

It is uncertain whether the Sandy Hook gunman was receiving proper treatment or medication for a list of disorders before executing his rage in bloodshed. Even today, debates simmer on about whether the mental health system failed him and his struggling, well-meaning mother, who was evidently overwhelmed with caring for him.

What is clear, however, is that he should have never had access to a gun – let alone many.

With Connecticut still reeling in the aftermath of the shooting, Governor Malloy approved comprehensive gun regulation just four months later in April of 2013. The bill pointedly reflects the legacy of the Sandy Hook tragedy by: Governor Dan Malloy embraces Nicole Hockley, whose son was killed in the massacre at Sandy Hook Elementary along with 19 other first graders. Photo: Brian A. Pounds via CTPost.

While the new laws didn’t stretch so far as to force owners to surrender their newly-banned firearms, parents of Sandy Hook shooting victims were relieved to be moving in the right direction.

That year, Connecticut witnessed the greatest consequent drop of total firearm fatalities in six years.[footnote]Busemeyer, Stephen. “Obama Said Connecticut Had A 40 Percent Drop In Gun Deaths. Really?” Courant.com, 6 Jan. 2016, www.courant.com/data-desk/hc-obama-said-connecticut-had-a-40-percent-drop-in-gun-deaths-really-20160106-htmlstory.html[/footnote]However, studies show that Connecticut gun deaths have been on a steady decline since long before 2013.

After this year’s shooting rampage at Marjory Stoneman Douglas High School in Parkland, Florida, the gun control debate roused with new intensity. Connecticut was once again looked to as an exemplary model for other states.

Despite a 17% increase in gun fatalities across the U.S. between 2009 and 2016, Connecticut is one of few states whose gun deaths fell – by 2.2%.[footnote]“U.S. Gun Death Rate Jumps 17 Percent Since 2008 Supreme Court District of Columbia v. Heller Decision Affirming Right to Own a Handgun for Self-Defense.” Violence Policy Center, 17 Jan. 2018, vpc.org/press/u-s-gun-death-rate-jumps-17-percent-since-2008-supreme-court-district-of-columbia-v-heller-decision-affirming-right-to-own-a-handgun-for-self-defense/[/footnote]The state also ranked 46th overall in the nation for having the fifth-lowest gun death rate. [footnote]Includes all gun fatalities by suicide, homicide and unintentional shootings. “State Gun Death Rates and Percent Change, 2009 to 2016.” Violence Policy Center, 17 Jan. 2018, vpc.org/state-gun-death-rates-and-percent-change-2009-to-2016/[/footnote]

Yet the most compelling research comes from a widely publicized study by Johns Hopkins University. The study reveals an estimated 40% drop in Connecticut gun homicides over a ten year period following the 1995 enactment of the Permit to Purchase (PTP) law.

This downturn can be seen in the graph below, beginning in 1995:

The PTP Law made it mandatory for all handgun purchasers to successfully pass a background check before getting a permit. This was a critical turning point, since handguns are the most common type of firearm used in crime.[footnote]“Law Categories.” National Data | State Firearm Laws, www.statefirearmlaws.org/law-categories[/footnote]

It is also important to note that one year after the PTP law took effect, the state also began concentrated efforts to halt drug-related killings with reinforced patrolling of crime-ridden neighborhoods.[footnote]Kifner, John. “In Bridgeport, Stopping Cars To Stop a Wave of Killings.” The New York Times, The New York Times, 5 Oct. 1996, www.nytimes.com/1996/10/05/nyregion/in-bridgeport-stopping-cars-to-stop-a-wave-of-killings.html[/footnote]

In spite of the death toll from Sandy Hook, Connecticut’s gun homicide rate has been on the decline since years prior. Earlier Connecticut gun policy and other factors may have impacted this.

No two states have the same laws or fatality rates, though similarities can be seen at a glance.
To a degree, a state’s gun laws are only as effective as those of its neighbors, since firearms are easily moved across state lines. Connecticut is surrounded by states with robust gun policy:

Hover over a state to view its number of gun laws.

Hover over a state to view its firearm deaths.

Progressive states also appear to have a “halo” effect, lowering gun fatalities in adjacent states even when they have more lenient laws.[footnote]Welch, Ashley. “What Impact Do State Gun Laws Have on Shooting Deaths?” CBS News, CBS Interactive, 5 Mar. 2018, www.cbsnews.com/news/gun-control-laws-state-impact-on-shooting-deaths-suicide-study/[/footnote]

To illustrate this idea, Maine, New Hampshire, and Vermont only have 11, 9 and 6 gun provisions, respectively, and some of the lowest firearm mortality rates in the nation. They are also hedged in by Massachusetts, New York, Connecticut, and Rhode Island, which have a combined 320 gun laws.

Are the laws contributing to lower gun death rates?

A study released by the Journal of the American Medical Association (JAMA) suggests they are. Over 3,000 counties in the 48 contiguous U.S. were scored for their firearm death rates between 2010 and 2014. The results revealed that:

Though the results of the study aren’t conclusive, they point to the overall success of states like Connecticut.

The Future of Gun Legislation

Just as tragedy significantly shaped Connecticut gun legislation, mass shootings are often hard-earned precursors for change in other states. Surviving students from this year’s massacre at Marjory Stoneman Douglas High that left 17 dead and 14 injured in Parkland, Florida, spent their summer break campaigning for their own safety and confronting members of congress.

Must tragedy strike before lawmakers will act?

Some are refusing to take any chances. Women and mothers in particular are demanding change.

Shannon Watts was a stay-at-home mother of five in Indiana when she first learned about the horrific events at Sandy Hook Elementary. Though she was nowhere near Newtown geographically, she was outraged. Her distress led her to Facebook, where she instinctively started a group to discuss better gun laws.

The group quickly flourished into Moms Demand Action for Gun Sense in America, now one of the largest grassroots organizations in American politics which amasses 300,000 active volunteers[footnote]Epstein, Ethan, and Natasha Korecki. “How to Raise an ‘Army of Angry Moms and Women’ From Your Own Kitchen.” POLITICO, POLITICO, 7 Aug. 2018, www.politico.com/magazine/story/2018/08/07/moms-demand-action-gun-control-219160[/footnote]- 200,000 of them who have joined since the Florida school shooting. The movement has chapters in all 50 states. 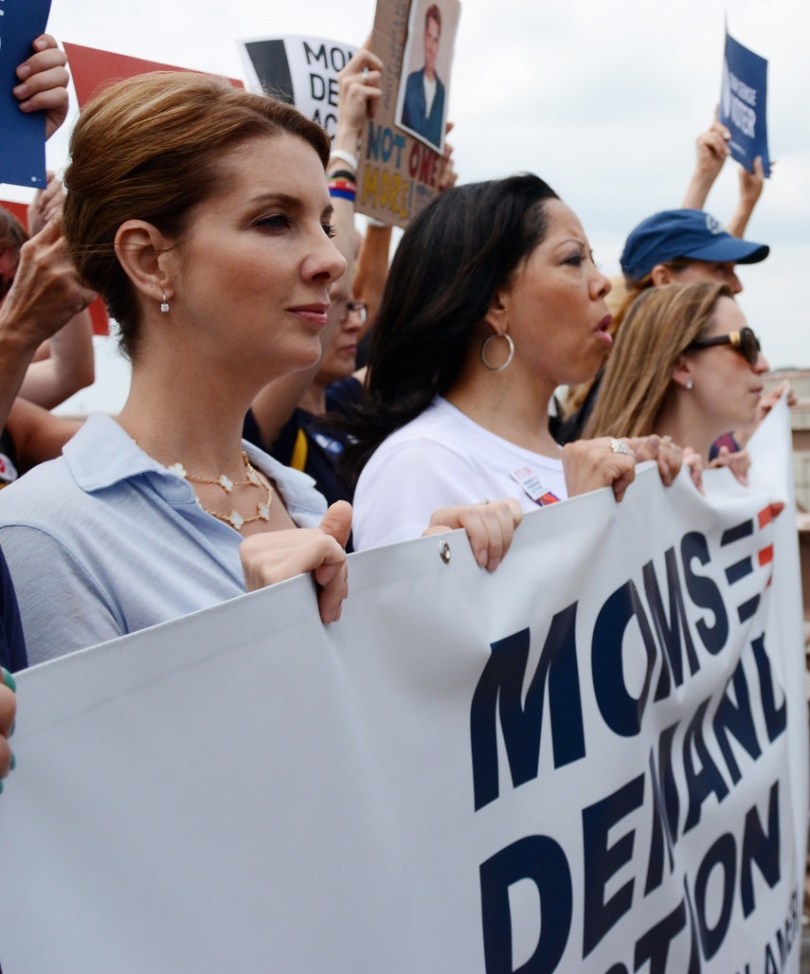 Not to be underestimated, Moms Demand has influenced the downfall of 90% of bills backed by the NRA in just the last year.[footnote]Epstein, Ethan, and Natasha Korecki. “How to Raise an ‘Army of Angry Moms and Women’ From Your Own Kitchen.” POLITICO, POLITICO, 7 Aug. 2018, www.politico.com/magazine/story/2018/08/07/moms-demand-action-gun-control-219160[/footnote]

“When women get involved, things change. Especially when the safety of their families and communities are at risk,” said Watts.

Nicole Hockley, who lost her son Dylan in the Sandy Hook shooting, said, “When people say nothing has changed since Sandy Hook, that’s just not true. There has been legislative change. There has been community change. Sandy Hook Promise trained three million kids and adults how to see the signs in the last three years; we’ve stopped school shootings. So I know we’ve saved lives. I know we’ve changed what could’ve been.”

As a public health issue, gun violence impacts all Connecticut residents – including the attorneys at The Flood Law Firm. We are actively involved with and concerned about the safety of our local community. If you have questions regarding Connecticut gun law or liability and would like to speak to a member of our firm, please call us at (877) 987-9529. Your phone call is free and confidential.

You may also voice your opinion by contacting your local legislator.